Skip to content
Loading...
The winner of the second Stignani Competition is GYULA NAGY from Hungary – congratulations!

LADIES AND GENTELMEN, WE HAVE A WINNER…

The winner of the second Stignani Competition in Imola is Gyula Nagy, baritone from Hungary. Stignani organization congratulates you from our heart.

Nagy studied with Károly Ötvös and Mária Fekete in Hungary and with Philip O’Reilly at the Royal Irish Academy of Music. He also trained at the National Opera Studio, supported by the Royal Opera House and the International Opera Awards Foundation, and was a member of the Opera Theatre Company’s Young Associate Artists Programme in Dublin. He currently learns with Robert Dean and Nicholas Powell. He previously studied English language and literature and theatre studies at the University of Pannonia in Veszprém, Hungary. He has received support from the Tudás a Jövönkért Foundation, the John McCormack Society and the Gaiety Bursary.

Positions before joining the Programme included singing as an Associate Artist with Welsh National Opera, where his roles include Silvio (Pagliacci) and covering Count Almaviva (Le nozze di Figaro) and the Count (Elena Langer’s Figaro Gets a Divorce). Since leaving the Programme appearances include Ulysses (The Return of Ulysses) for Opera Collective Ireland, and Gypsy (The Fair at Sorochïntsi) for Komische Oper Berlin. 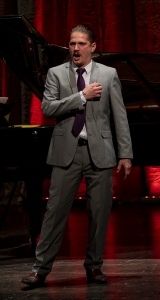